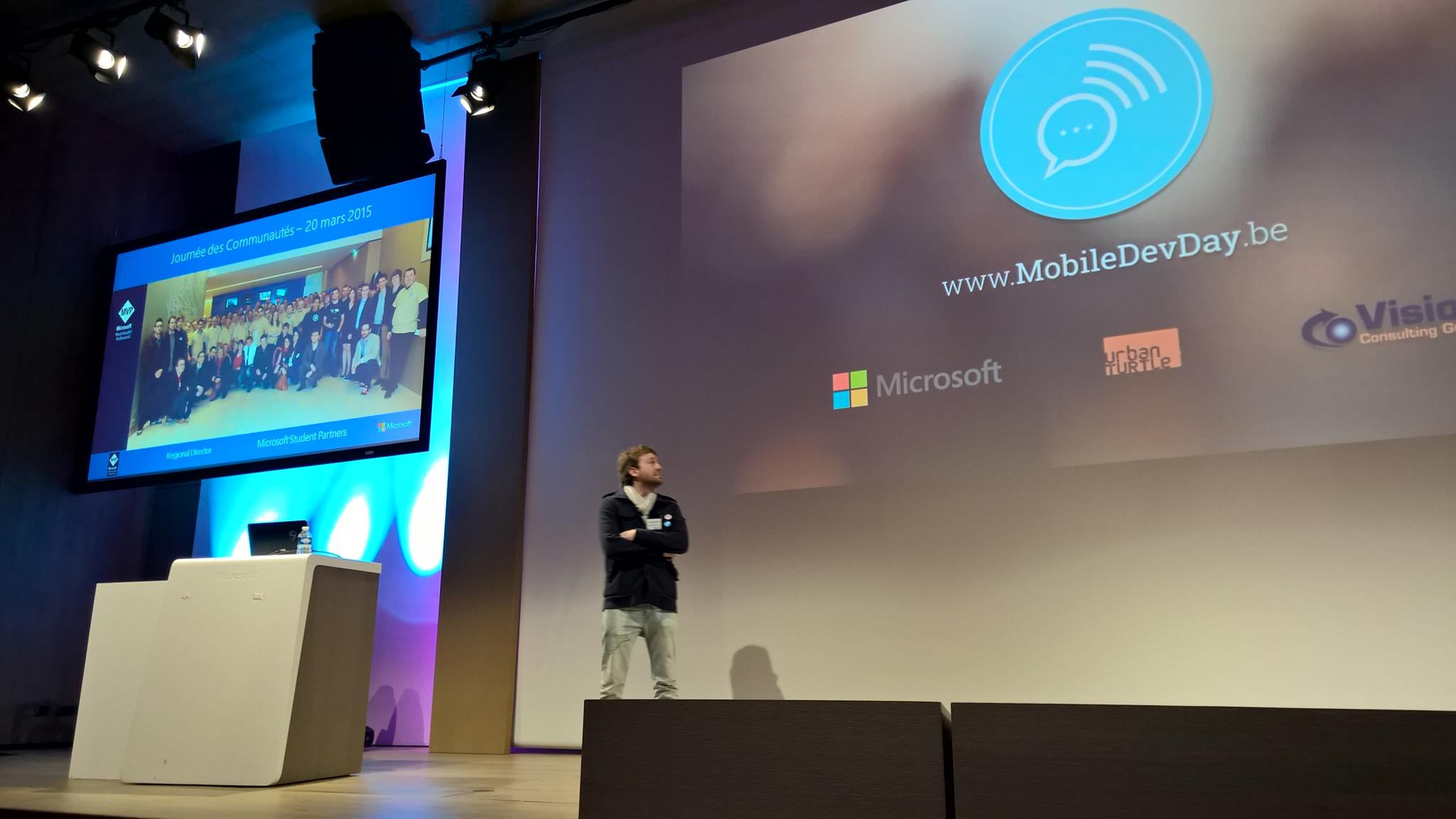 The second edition of the Mobile Dev Day happened on November 27th. I've been waiting for that moment for a long time, living some really stressful days the week before the event. And now it's done.

That day, everything went really fast. A few things went wrong. We've been facing some technical issues, as always. But at the end, I think it was a great event.

I know there's place for improvement. From my point of view, not everything was okay. And looking back at the whole picture, I would probably have changed a few things. But still, I'm proud of what we achieved.

Now, I'd like to think about what we did, and how we could do better next year. I did keep notes of our mistakes. Things that made us face difficulties or cost us money:

But there are still some points that I can't figure out by myself.

That's why we sent a survey to all our attendees. 77 out of the 260 attendees replied so far - if you attended the event and haven't give your feedback yet, you can still do it in the comments.

I don't know if I can say it is representative, but that's a start.

Quick look at the results

As you can see, most people came from Wallonia. This is not surprising. Typicalyl Belgium. Belgians are not keen to move.

It's interesting to see that people came from Paris just to see Scott Hanselman's talk. Aside to that, I know that some Belgians would have love him to make a talk somewhere in Vlaanderen (which he couldn't because he was in Hollidays for a few days and travelling with his family), but they didn't show up at the event. I guess the talk wasn't worth the road.

But I can understand that. People have obligations. Family, job, etc. And actually, that's why I keep organizing events in Wallonia, and not in Brussels or in Vlaanderen. There are already enough stuff over there. And a few years ago, there were basically nothing here, in the south. I'm glad to see we are now changing this. 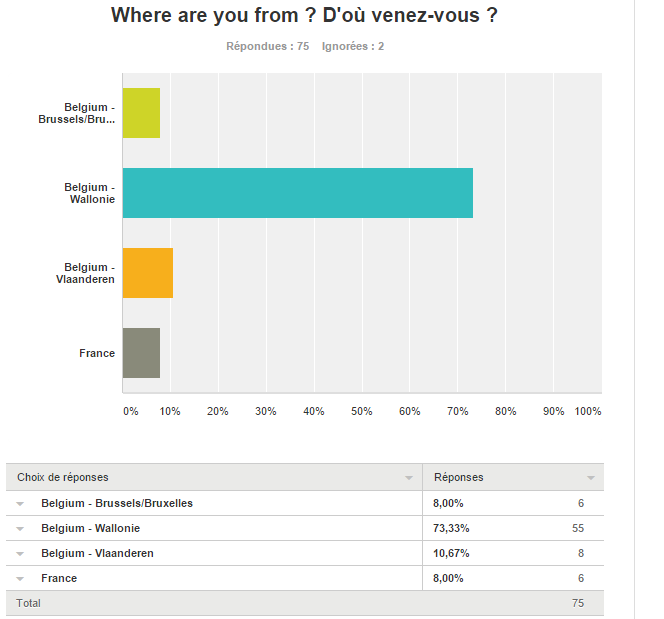 In terms of languages, the ratio is basically the same: 10% of Dutch-speaking attendees / 90% French-speaking.

Most attendees were professionals, but I'm glad we had nearly 20% of students. One of our goal is to give new opportunities to younger developers and students, and community events are a good starting point. This is also the reason why the event is free for students, and why we gave away unlimited 100% discount codes to every user groups we knew in Belgium or those who requested some.

Most people were developers, of course, and only one courageous designer has shown up. Nonetheless, we had two designer-oriented sessions ("How to survive in a world without designers? " by Christopher Maneu, and "Vers un design multiplateforme " by Benjamin Launay), and they received a very positive feedback, which means our speakers have been able to convince the developer audience too. 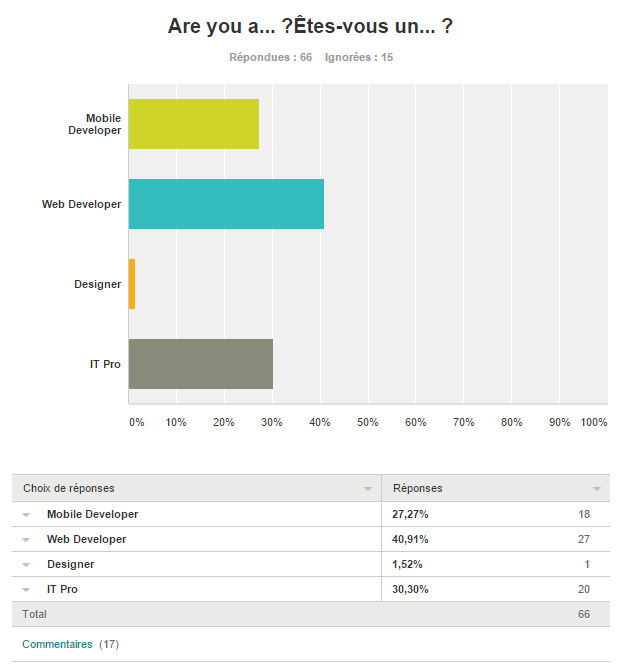 Surprisingly, we also had 30% of IT Pros, which is quite huge given that most talks were developer oriented, and nothing really targeting that specific audience.

Even if most developers were qualifying themselves as Web developers, audience were mainly interested in Mobile Development.

This is probably irrelevant due to the choices that we put in the survey, but those were related to the 4 categories of talks we had for this edition. 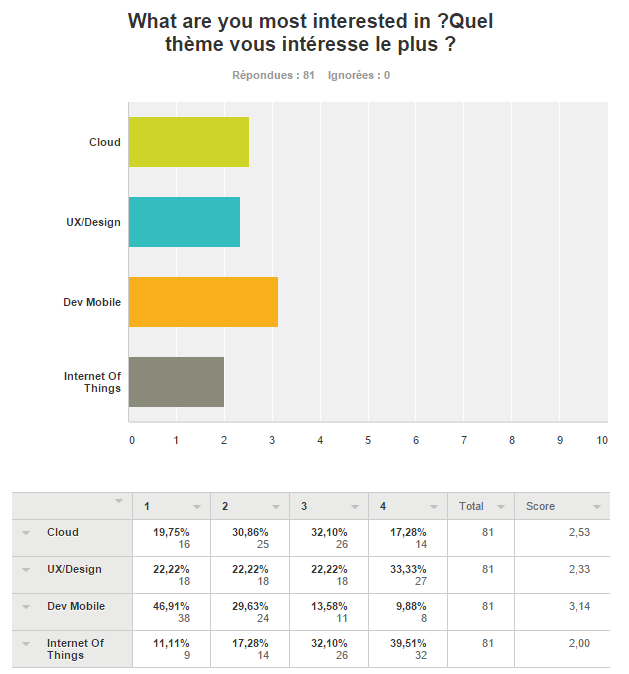 And what about the mobile technologies? The majority of the audience is keen to open the event to other technologies. This is an interesting point. 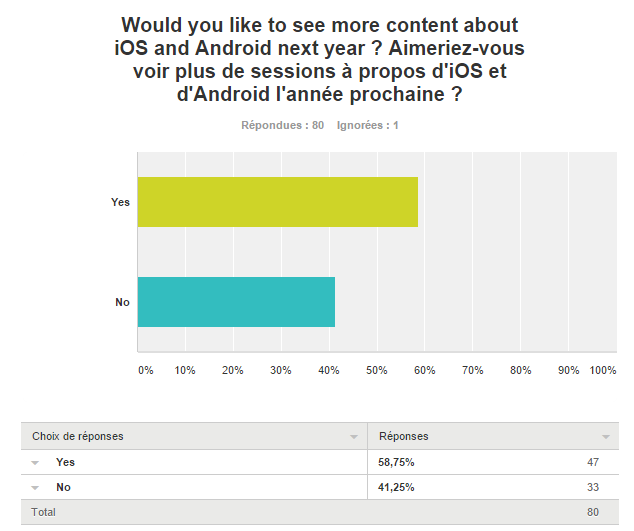 This is actually something we already wanted to do last year. But with the organization team composed at 80% of Microsoft MVPs, it's quite normal to have a lot of Microsoft-related speakers.

Here are some of the anonymous comments for this question.

There are those who don't want anything else:

And those who are open to different platforms:

And finally, here is the suggestions and free comments section.

I agree we failed on those three points. We really have to show improvement next year.

Then, we received more controversial (in my opinion) comments :

This comment refers to Rudy Huyn's session "Mais c'est quoi le random ?". I personnaly loved this session, and we received a lot of positive feedback about it. I can understand not everybody likes it. But we will probably keep scheduling that kind of sessions :-)

We never forced anybody to speak English. It was everbody's own decision. I'm not sure what to do here. Should we audition speakers first? I'm not a native speaker either... Who am I to judge?

Last year, we wanted an equity between French and English, with two different tracks and always the choici between the two languages. It was probably a mistake.

Next time, we should do the schedule according to what we have and — you can call me naive — I hope people will naturally choose to speak in the language they feel more comfortable with.

I think we should first make sure our 1-day event is good enough before trying to get bigger. Two days also means much more budget... don't forget we are only volunteers working on our spare time.

Last year's catering wasn't the best I've seen, but it wasn't the worst either for an almost free event. Again, it's a matter of money. The more sponsors we have, the better you'll eat.

Well, a more central position is a relative point of view. Namur isn't central for people coming from Tournai and North of France. And I know Mons is far far away from Liège.

There is no perfect place, but for me it's easier to stay in Mons. I know our partners, the venue, it's easier for me to be there in no time. And I like this city!

My thoughts on this

Do I care about languages?

Scott Hanselman told us he was surprised everything was not in English. Technical conferences have to be in English. I partially agree.

The feedback showed us people are easily annoyed by non-native speakers who are not comfortable with English. It makes sense. But those speakers are technically very good. Should we avoid them and miss a great session just because English should be the only language? That would be a shame.

Moreover, I think it's important to have localized content. Microsoft encourages MVPs to produce local content, and I think this is a necessary evil. It makes it more accessible, but it doesn't educate people. So, it's okay to have French, but we shouldn't limit ourselves to French. And we don't.

Most of our audience is French speaking (90%), and almost everybody understands English. We'll keep going with those two, without forcing French native to speak a language they are not enough comfortable with.

Do I care about technologies?

It's time to move on! Windows, iOS, Android, ...we may not speak the same language (even if we could :-) C# FTW!), but we are all facing the same problems in our everyday jobs.

Moreover, with the Mobile Dev Day, we originally wanted to have atypic talks by speakers thinking out of the box.

I like the example of Samuel Blanchard's last talk: "Scriptons nos apps Windows Phone ! ". A JavaScript parser to build XAML user interfaces in JavaScript. Let's be honest: it was pointless. But it was technically doable. And it was fun. And it resulted in a must-have app available in the store: Pockat.

It doesn't matter if this talk was related to Microsoft technologies or not. I would have enjoyed it as much if it was Android, iOS, or even (more) SmallTalk.

I don't care about technologies, I care about stories and experiences. I want to see things I couldn't read on my friends technical blogs.

How do you feel about all this?

What do you expect from an event such as the Mobile Dev Day?

Did you attend the event? Will you join us for a next edition?

You know we're not going to stop now. We have plenty of ideas. The event has to evolve, for the best. You'll notice some changes, for sure.

In the coming days, we will announce our next date and some of the first names of our lineup. If you have suggestions, or if you want to give a talk, don't hesitate to get in touch!

Until then, you can watch the aftermovie of the last edition: